They ran and helped. Results of the Poland Business Run 2022 in Krakow 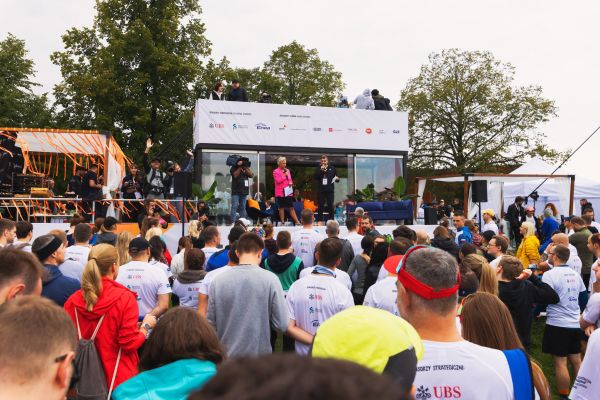 The 11th edition of the charity Poland Business Run took place on Sunday, 4 September, with 32,000 runners from over 1,500 companies signing up. Nine thousand runners took off in Kraków, while the rest took part in the virtual competition. In addition to the funds from the starting fees, an additional PLN 152,000 collected in the "Help More" campaign will go to those in need. Around 100 beneficiaries from all over Poland will receive prostheses, wheelchairs and rehabilitation.

The Poland Business Run is a 5x4 km relay race. In the virtual formula, representatives of companies and corporations ran their kilometers on a self-selected route, and recorded and transmitted their results using a smartphone application. In the capital of the Lesser Poland region, competitors ran around Krakow's Blonia Park and through Jordan Park in two rounds - morning and afternoon.

– Before the pandemic, we used to run in the Main Square, but the runners turned out in such numbers that we simply wouldn't have been able to fit in there anymore. I am delighted that we can see each other again in person and run the kilometers together for a good cause. Thank you very much to the runners, sponsors and partners, without whom this would not have been possible – said Agnieszka Pleti, President of the Poland Business Run Foundation, at the opening of the competition at Błonia.

Through their participation in the competition, the companies will help a total of 100 people from all over Poland who are facing a motor disability or have undergone a mastectomy. Funding will be provided for prosthetic limbs, active and sports wheelchairs, rehabilitation stays and psychological consultations.

– I am very surprised that so many people came to Blonia Park today to run for me and other beneficiaries. I'm keeping my fingers crossed for everyone and thanking the companies who fielded their teams for such a charitable cause – said one of the beneficiaries with a leg amputation during the event

Although a worthy cause was at the forefront of everyone's minds, there was plenty of fierce sporting competition. The top five were the relay teams:

The next places are: 6. GO APTIV ONE from APTIV Services Poland, 7. Sabre Run Force One from Sabre Polska, 8. State Street 1 from State Street, 9. BorgWarner Running Team from Borg Warner, 10. IS. from Integrated Solutions.

The relay teams competed not only for the title of the fastest team. As part of the “Help More” campaign, which is an integral part of the Run, the teams collected funds to support the beneficiaries of the Poland Business Run Foundation. After the exciting finale, which took place on 4 September at 12:00 noon, the action managed to collect almost PLN 150,000, which will be entirely transferred to help purchase prosthetic limbs and rehabilitation for people in need.

The top teams of the charity classification, to which the Yellow Leader T-Shirts go, are:

You can watch coverage of Sunday's event on the official Poland Business Run Facebook page.

The full list of results can be found at: https://live.sts-timing.pl/businessrun2022/index.php?d=1

We are using cookies to give you the best experience on our site. Cookies are files stored in your browser and are used by most websites to help personalise your web experience. More information on cookies and how they are used can be found in our terms.privacy.policy.2.

By clicking "Proceed" you are confirming you have read this statement.